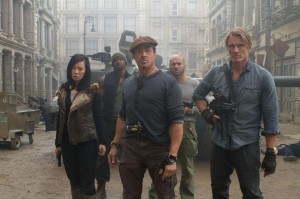 When I was really little I use to love action movies. My favorite actors were of course Sylvester Stallone and Arnold Schwarzenegger. They kicked ass in all their movies and it was cool watching them beat up all the tough looking bad guys. Then when I got a little older, maybe around my teenage years I realized how awful these movies actually were.

They were poorly acted, had awful storylines, unrealistic displays of heroism, and most importantly they all had the same terrible script. It went basically like this: Protagonist must fight to save the world. Protagonist nearly dies in his initial attempt to save the world. And then Protagonist overcomes amazing adversity and somehow triumphs over evil to save all of mankind!

Blah blah blah. Same old story, same old boring movie. In fact nowadays I will still watch an action movie now and then. Only now I watch it purely for its comedic value. I love laughing at how bad they really are!

Men do not be like action movies! By this I mean do not be predictable and boring. Women hate action movies for this same reason. They hate predictable and boring. Sure the special effects are cool for a little while, but after the bombs explode, it sucks again! Switch things up on them and be unpredictable. Don’t just say what you think she wants to hear, say what comes to mind. Be bold and say whatever it is you want to say. Don’t be scared by what you think her reaction will be, just do it. It’s a bit counter-intuitive, but it works.

By just being yourself sometimes and saying what you want to say or doing what comes to mind you take over her reality and make it yours. You become the dominant personality in the conversation and she will allow you to lead the interaction. She might object at first, if for instance you swore, slightly offended her in some way, or you said something that she didn’t agree with. But if you keep on pushing through, and not getting upset that she didn’t like what you initially had to say, you will be better off.

Don’t let her phase you: be unreactive to her reactions. She will actually respect you for speaking your mind as most guys will never do this. Most guys will just be that boring action movie, and stick to that boring script. They will always agree with her and try not to make her upset. They will ask the same boring questions, and have the same boring responses to her questions. Don’t be that guy. Stand out from that group of men. Switch up the script on her, and start making your own movie! Your results will skyrocket with women.